No! We aren’t yet done with Motorola’s launches! Motorola finally launches it’s much awaited Smartwatch, the Moto 360 at IFA 2014 in Berlin. The Smartwatch was first unveiled at the Google I/O 2014, and after previewing it at Google I/O, everyone was waiting impatiently for the gorgeous Moto 360. And why shouldn’t they wait? After all it’s the first smartwatch which looked more like a traditional watch!

Moto 360 is not only about it’s circular display or the metal body, it has a lot of brains too! The 1.65 inch watch runs on Android wear OS, and is powered by a Snapdragon 400 chip and 512 MB of RAM which is well and good to run the tiny mini watch OS. (Android Wear to be exact!) The watch also has a pedometer as well as a heart rate sensor for all you fitness buffs out there. 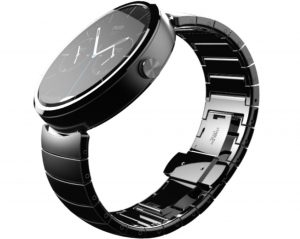 The Moto 360 launches today in the US for $249.99, and if you want the metal band variant you’ll have to wait till december, and it’ll cost $300. tough later on the metal band will go on sale for $70, so you can easily change from leather to metal depending your mood! So to sum it out, Moto 360 is an Elegant, Sophisticated, Well Crafted and Premium feeling smartwatch! It can be replaced by your timepiece with a breeze and you’ll fall in love with the Moto 360 as soon as you wear this piece of tech craftmanship! So what are you waiting for? Go to Motorola’s website and order it right away, in our opinion the stocks won’t last for long! And after ordering do let us know in the comment section down below! #Peace

The New Moto X Announced, Tweaks The Best Of Motorola