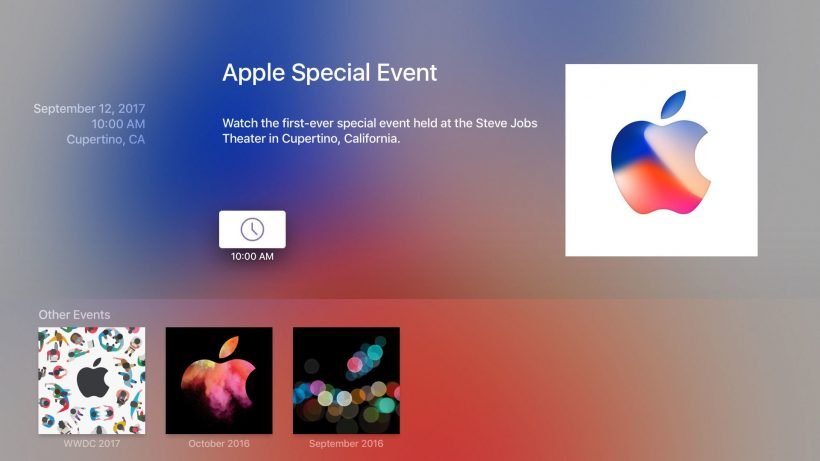 Apple has updated its Apple Events app for Apple TV, adding the upcoming Special Event into the app. This is quite obvious as we are less than a week away from the next-generation iPhone announcement.

Increasing the hype, the Apple TV app now features the multi-color theme of the invites Apple sent out last week, with “Watch the first-ever special event at the Steve Jobs Theater in Cupertino, California” description.

Not just the Apple Events app, Apple has also updated its website with the Special Event landing page. The major highlight of this Apple Special Event, apart from the 10th anniversary iPhone, is that it will be hosted at Apple Park’s Steve Jobs Theater. The 1,000-seat underground auditorium is a cylinder-shaped construction covered with glass walls and carbon fiber roof.

Apple’s September 2017 Special Event will kick off at 10AM PT/10:45PM NPT on Tuesday, September 12 next week. The event will give us our first look at the upcoming iPhone officially. Additionally, new Apple Watch and Apple TV hardwares are also expected to debut at the event. While on the software front, Apple’s updated line of softwares — iOS 11, macOS High Sierra, watchOS 4, and tvOS 11 — will launch to the public over the air next week.

AppleApple Special EventApple TV
Up Next

Google Assistant for iOS launches in the UK, France, and Germany