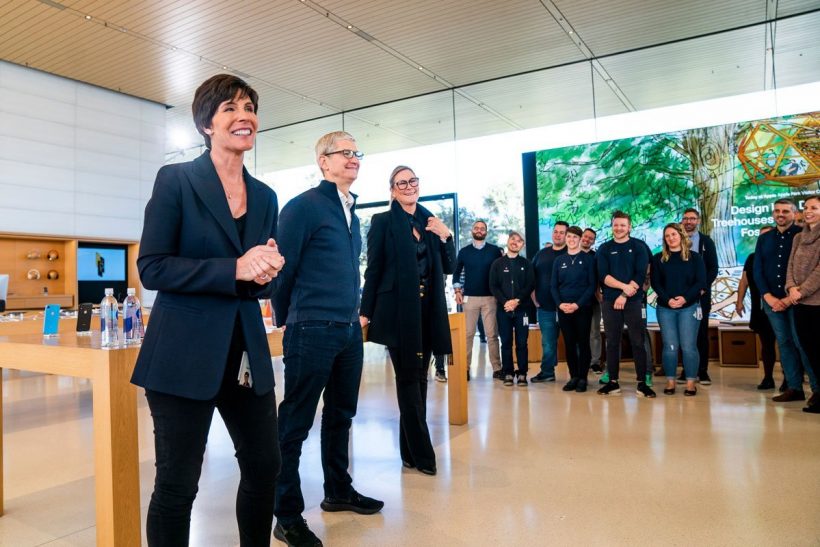 Filling in Angela Ahrendts’ place at Apple is Deirdre O’Brien, a long-time Apple veteran with 30 years of Apple experience. She will be taking on new responsibilities for Apple’s retail and online stores in an expanded dual role as Senior Vice President of Retail + People, while continuing to lead the People team and all People-related operations.

“At Apple, we believe our soul is our people, and Deirdre understands the qualities and strengths of our team better than anyone,” said Tim Cook, Apple’s CEO. “For more than three decades, she has helped keep Apple focused on serving customers and enriching lives. She’s an exceptional leader and she’s been a vital partner to our retail teams around the world since the very beginning. I am thrilled to work alongside Deirdre in her new role, and I know our 70,000 retail employees will be, too.”

O’Brien said, “It is the opportunity of a lifetime to work with, and learn from, such a talented, diverse and imaginative team. I am looking forward to this journey, and to continuing the important work of the People team in supporting all of Apple’s amazing employees.”

“The last five years have been the most stimulating, challenging and fulfilling of my career. Through the teams’ collective efforts, Retail has never been stronger or better positioned to make an even greater contribution for Apple,” said Angela Ahrendts, senior vice president of Retail. “I feel there is no better time to pass the baton to Deirdre, one of Apple’s strongest executives. I look forward to watching how this amazing team, under her leadership, will continue to change the world one person and one community at a time.”

Apple has already updated its executive leadership page with O’Brien’s new position as Senior Vice President of Retail + People. Ahrendts will stay at Apple until April, according to the comapny.

AppleApple Retail
Up Next