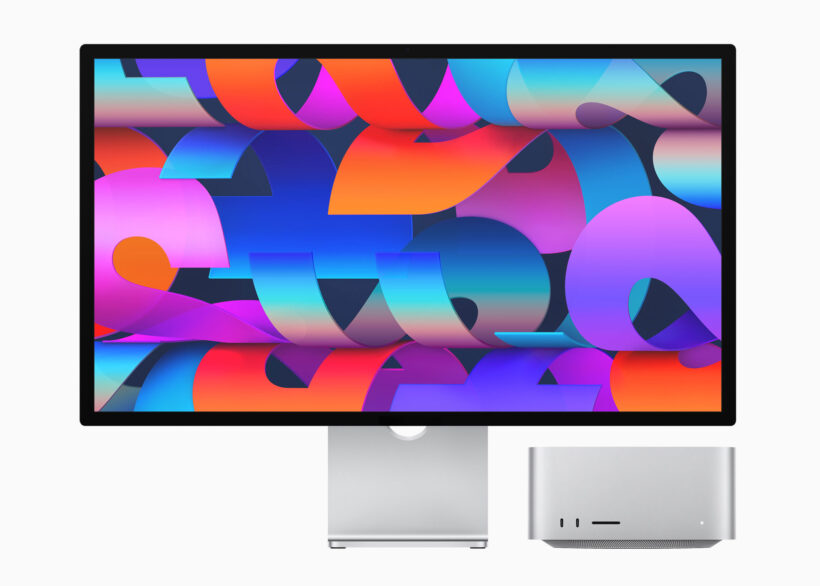 The new Mac Studio is compact and looks familiar — it kinda looks like two Mac minis stacked upon each other in an aluminum enclosure. But under the hood, we have a beast with M1 Max or M1 Ultra, depending on your preference. The M1 Ultra, unveiled at the same event, is the most powerful M1 chip, featuring a 20-core CPU, 64-core GPU, and a 32-core Neural Engine.

The Mac Studio includes four Thunderbolt 4 ports, a 10Gb Ethernet port, two USB-A ports, an HDMI port, and a pro audio jack for high-impedance headphones or external amplified speakers on the back. On the front (yes the front!), we have an SD card slot and two USB-C ports (Thunderbolt 4 on the M1 Ultra). The device can connect up to four Pro Display XDRs and a 4K TV simultaneously.

Apple’s Studio Display is a 27-inch 5K Retina screen with 14.7 million pixels, P3 wide color, and can reach up to 600 nits of brightness. It comes with a Tilt-adjustable stand or VESA adapter.

There’s a 12-megapixel ultra-wide camera with Center Stage on the top, which keeps users in the frame even when they move during video calls. On the audio part, it includes a studio-quality, three-microphone array, and a high-fidelity six-speaker sound system. There’s also support for Spatial Audio with Dolby Atmos. Under the hood, there’s an A13 Bionic processor for handling the camera and audio capabilities.

Apple unveils M1 Ultra, the most powerful Apple Silicon yet