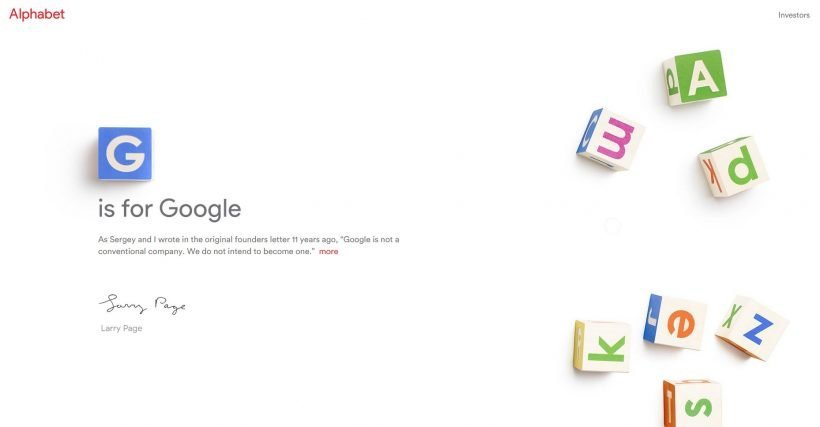 Google co-founder Larry Page has announced the formation of a new parent company called Alphabet, moving away from the position of CEO at Google. Page in a blog post today revealed that the entire Google projects – and Google itself – will be a subsidiary of the new company Alphabet.

Page will serve as CEO of Alphabet along with Sergey Brin as President. And Sundar Pichai will be the new CEO of Google.

We liked the name Alphabet because it means a collection of letters that represent language, one of humanity’s most important innovations, and is the core of how we index with Google search! We also like that it means alpha-bet (Alpha is investment return above benchmark), which we strive for! I should add that we are not intending for this to be a big consumer brand with related products–the whole point is that Alphabet companies should have independence and develop their own brands.

Cleverly addressed at abc.xyz, Alphabet will now curate all the on-going projects from Google, including Life Sciences, Calico, Google X, and Google itself. Google will be a wholly-owned subsidiary of Alphabet.

Each of Alphabet’s company will have its own CEO, and will likely function independently, receiving guidance from Page and Brin.

Alphabet Inc. will replace Google Inc. has a publicly-trade entity, accounting all the shares from Google to Alphabet. However, it’ll continue to trade as ‘GOOGL’ or ‘GOOG’ on NASDAQ. And Google financials will separate out from the rest of Alphabet’s business starting Q4 2015.