Xiaomi at an event in Vishakapatnam, Andhra Pradesh announced its first-ever smartphone assembled in India. And it’s named Redmi 2 Prime. The announcement follows India’s “Make in India” campaign initiated by the government.

Redmi 2 Prime is the first smartphone from Xiaomi to be assembled in our facility in Sri City. We would like to thank Andhra Pradesh government for helping us to start local manufacturing within just six months. Initial talks started in February and today we have already started to sell the Redmi 2 Prime. 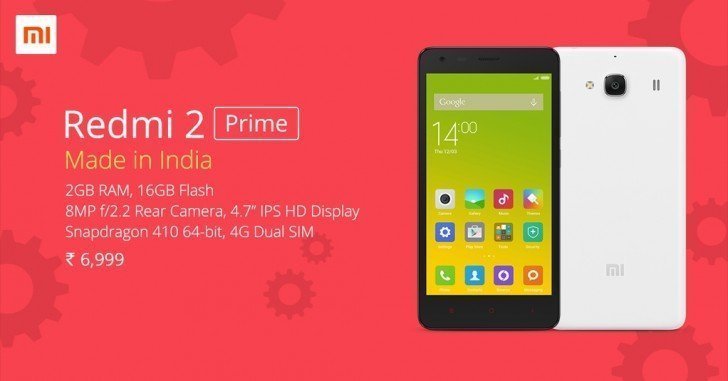 Xiaomi Redmi 2 Prime sports a 4.7-inch 720p display, with a Snapdragon 410 processor and 2GB of RAM on board. The Redmi 2 Prime comes with 8-megapixel rear and 2-megaixel front shooters, offering 16GB of stock storage. All of these powered by a 2,200mAh battery unit. The device will run Android 4.4.4 KitKat with MIUI 6 at launch.

Xiaomi is partnering with Foxconn in assembling the phone in India, importing all the components from China initially. The device is available in white and dark grey color variants for IRs. 6,999 ($110) in the country on Flipkart without any flash sale.