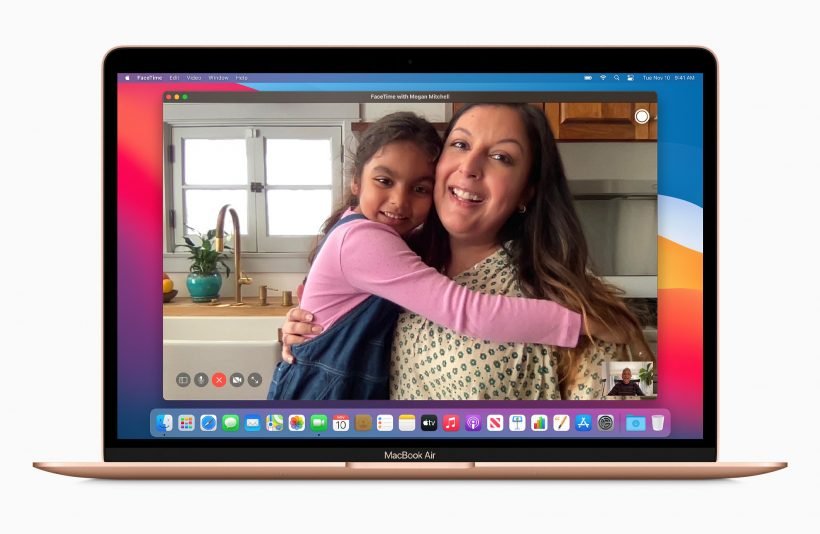 Apple unveiled the first Macs with Apple Silicon at its “One more thing” event, as promised when it announced the transition away from Intel chips. The MacBook Air and the 13-inch MacBook Pro both come with the new M1 system-on-a-chip, the first Apple-made chip for Mac. And it brings some serious improvements as well as claims.

As for the design, the device measures 11.97 x 8.36 x 0.16-0.63 inches and weighs 2.8 pounds, which is similar to the MacBook Air we’ve seen before. Like its predecessor, it comes in three color options: silver, gold, and space gray. It’s available in up to 16GB of memory and 2TB of storage.

Apple says the new Air is up to 3.5 times faster than the previous Intel-based MacBook Air and holds capacity to deliver up to five times more graphic performance. The device is capable of offering up to 15 hours of wireless web browsing and up to 18 hours of video playback to a charge. It supports Wi-Fi 6, Bluetooth 5.0, and Touch ID. There are two USB-C ports as well as a headphone jack.

The 13-inch Retina Display MacBook Pro features 500 nits brightness, P3 wide color support for vivid, true-to-life colors, and True Tone. Using the M1 chipset, it promises up to 2.8 times faster performance compared to existing Intel models, and the eight-core GPU boosts its speed up to five times. Compared to the “best-selling Windows desktop in its price range,” Apple claims its M1 MacBook Pro is three times faster in performance. The new Pro comes with up to 16GB of RAM and is configurable up to 2TB of storage, like the new Air.

Performance aside, Apple claims the MacBook Pro can deliver up to 17 hours of wireless web browsing and up to 20 hours of video playback – the longest battery life ever on a Mac notebook. The device also includes Apple’s Secure Enclave in the M1 and Touch ID, and features two Thunderbolt ports with USB 4 support. It comes with Wi-Fi 6, and studio quality mics paired with a better webcam that provides improved contrast and detail in low light.

The new MacBook Air starts at $999 and the MacBook Pro at $1,299. You can make pre-orders from Apple’s website, with deliveries scheduled to begin from November 17.

AnnouncementMacBook AirMacBook Pro
Up Next