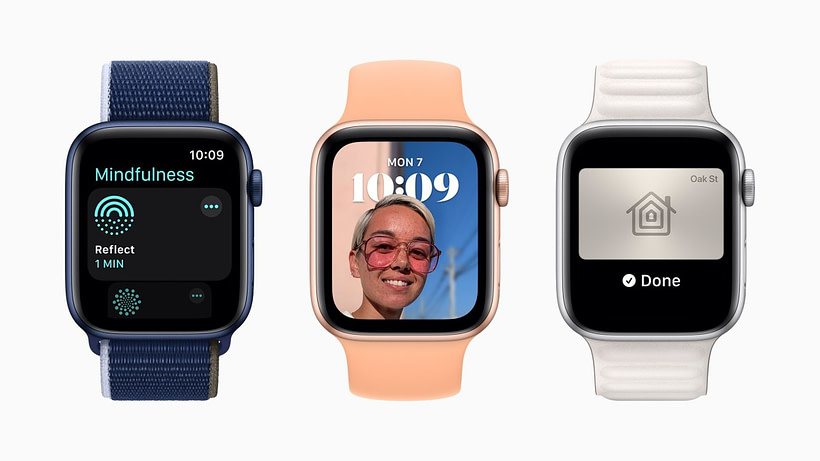 Apple Watch Series 6 will now support digital car keys allowing users to securely unlock their car from a distance and start it from the driver’s seat. Like iOS and iPadOS updates, users can add keys for their home, office, and hotel to Wallet and unlock it with a tap from their watch. Users in the United States can add their driver’s license or state ID to Wallet as well.

With the redesigned Home app in watchOS 8, users can view HomeKit-enabled cameras from their wrist. Apple Watch wearers can tap the Intercom function and broadcast a message to specific rooms, personal devices, or HomePods.

Apple has added two new workouts to the Fitness app in watchOS 8 – Tai Chi and Pilates – for both physical fitness and mindful movement. Apple says the new workouts are “supported by powerful, validated custom-built heart rate and motion algorithms to provide users with accurate metrics.”

The Breathe app becomes the Mindfulness app in watchOS 8. It brings an enhanced Breathe experience and a new session type, Reflect. The latter offers a mindful intention to focus that can be done anywhere and at any time. For example, the user may see something like “Recall a time recently when you felt a sense of calm. Bring that feeling into this moment,” as part of their Reflect session, which lasts for as little as one minute.

watchOS 8 offers more insight into users’ overall wellness by tracking their sleeping respiratory rate. It is the number of breaths per minute, which is measured using the watch’s built-in accelerometer while sleeping. This information can be viewed in the Health app on iPhone and is also available for developers to use with permission through HealthKit.

The Photos watch face is getting elevated with Portraits watch face that brings portrait photos shot on iPhone to the Apple Watch. Apple says the watch face has an immersive, multilayered effect that highlights the subject. The Photos app is redesigned as well. Furthermore, photos can now be shared through Messages and Mail with the new Share Sheet.

Users can now use Scribble, dictation, and emoji all within the same message. The dictated messages can be edited as well. The Contacts app for Apple Watch lets users browse, add, and edit contacts directly from their wrist.

The Focus tool helps users reduce distractions. Focus on the Apple Watch works alongside iOS and filters notifications based on users’ status, making use of on-device intelligence.

Apple has introduced other numerous features such as Multiple timers, Find Items, Family Setup, and more. You can check out Apple’s preview page for watchOS 8.