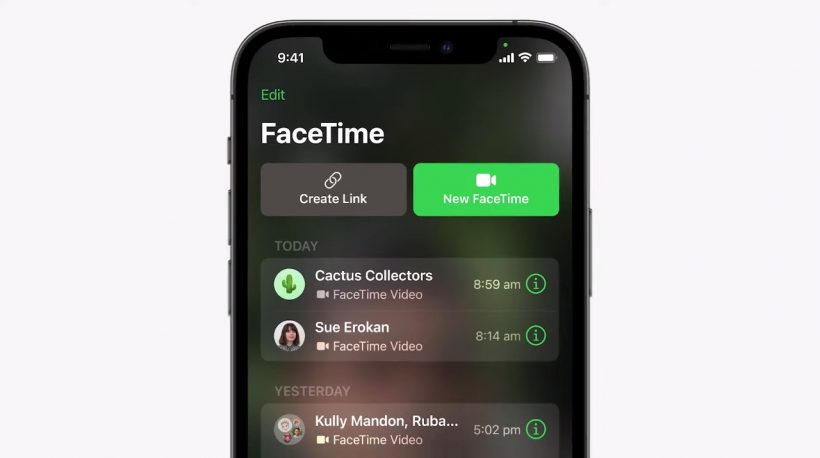 Apple’s software engineering chief Craig Federighi announced major updates coming to FaceTime with iOS 15. For the first time ever, Apple will allow users to join a FaceTime call using a link on the web regardless of the platform they’re on. This means you’ll be able to participate in FaceTime calls from your Android or Windows device, too.

Even though users can join FaceTime calls on Android and Windows, only users with Apple devices have the ability to schedule FaceTime calls. While this is a milestone for FaceTime, services like Zoom and Meet have had such features with greater controls for a long time. Apple says FaceTime calls are end-to-end encrypted on the web and require the latest version of Chrome or Edge.

In addition to FaceTime’s arrival on the web, there are numerous new features coming to the app. FaceTime now supports Grid view, meaning people on the call will have same-sized tiles instead of variable floating tiles. And the speaker’s tile highlights to focus on what the person is saying.

Apple is also bringing “portrait mode” to FaceTime which focuses on the subject and blurs out the background during video calls. Portrait mode on FaceTime works on iPhone Xs, iPhone XR, and later models, the latest iPad, iPad Air, iPad mini, and the M1 Macs.

Another useful feature coming to FaceTime is called SharePlay. SharePlay makes it possible to listen or watch content together in a group at once, with shared playback controls. It allows sharing songs, videos, and even your screen while you’re on a FaceTime call. Names like Disney Plus, Hulu, HBO Max, and Twitch are integrating with SharePlay API, along with Apple Music and Apple TV Plus, of course. This list is notably missing Netflix.

There’s also support for spatial audio and new microphone modes to filter the user’s voice and background noise. All these new FaceTime features are slated for release with iOS 15 this fall.