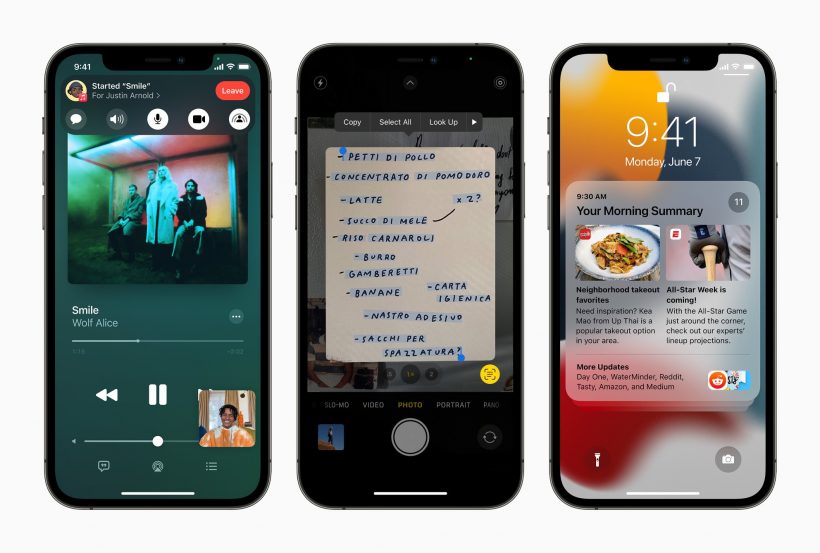 In iOS 15, FaceTime features new spatial audio that offers a sound experience as if it was coming from the person positioned on the screen. And for the video, FaceTime calls now offer a grid view and portrait mode support.

With SharePlay in ‌FaceTime‌, users can share music, videos, and movies in calls, in addition to sharing their screen (finally). SharePlay is available as an API to be integrated into third-party apps and works across ‌iPhone‌, iPad, and Mac, with shared playback controls.

The new interesting (and familiar) feature that Apple has added is the shareable link feature. Users can now generate a link from their Apple devices and schedule FaceTime calls, which can be joined ‌through the browser on Android and Windows devices.

iOS 15‌ offers users a powerful tool to help reduce distraction. Focus is a new feature that filters notifications and apps based on users’ demands. Users can set a custom Focus or select a suggested Focus that uses machine learning to suggest which apps are allowed to notify them. The Focus filter is automatically applied to other Apple devices on their account, too.

Users can create Home Screen pages with apps and widgets that resonate with their Focus to display relevant information on the screen. When a user’s Focus blocks incoming notifications, their status is automatically displayed to others in Messages.

Notifications on ‌iOS 15‌ have been redesigned. The redesign comes by adding contact photos for people and larger app icons. Users can now get a notification summary based on how they interact with the apps. It also prioritizes urgent messages and delivers them immediately.

The Live Text feature available on iOS 15 allows users to highlight and select text in images and take actions accordingly. It’s not just limited to the Photos app, rather available system-wide including Screenshots, Quick Look, and images on the web.

Safari gets a new design making the controls easier to reach. The new compact tab bar floats at the bottom of the screen so users can easily swipe between tabs. The tab groups allow users to easily access them at any time across their devices.

iOS 15‌ adds support for additional types of keys to the Wallet app. This includes corporate badges, hotel room keys, and keys for home smart locks. Apple introduced digital car keys last year, allowing users to tap to unlock their vehicle. This year, digital car keys get support for Ultra Wideband technology, so users can unlock and start their vehicle without taking out their iPhone from a pocket or bag. The Wallet app will also support ID Cards in the United States, allowing users to simply scan their driver’s license or state IDs to add to Wallet.

Apple has always been on the top when it comes to users’ privacy. The update introduces more privacy controls to help protect user information. The on-device speech recognition is now processed entirely on iPhone by default, the Mail Privacy Protection stops senders from learning whether an email has been opened, and also hides IP addresses so senders can’t see users’ location. The App Privacy Report allows users to overview how and when apps use the access that has been granted to them for location, photos, camera, microphone, and contacts within the past seven days.

iOS 15 also includes other updates such as redesigned Weather and Notes apps, updated Siri, Accessibility, and more. Apple’s iOS 15 preview page highlights most of them. The software update will be available for the iPod touch (7th generation) and iPhone 6s and later devices this fall.

FaceTime will work on Android and Windows via the web