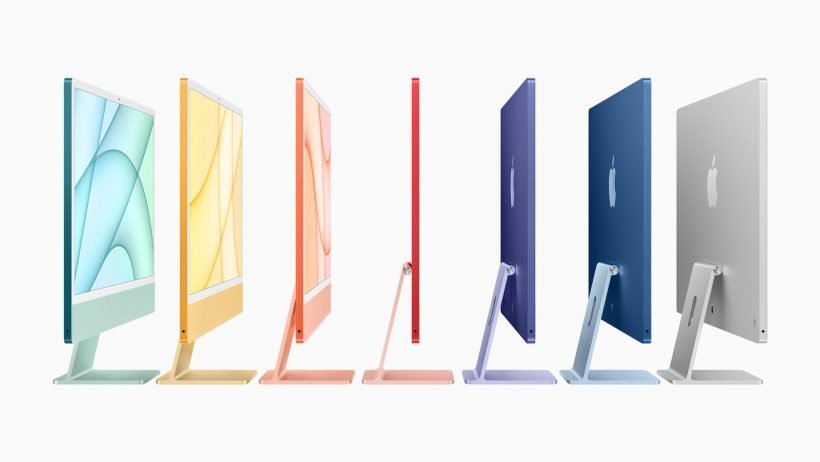 Apple held its first product launch of 2021 on April 20. The virtual event brought a much-awaited upgrade to Apple’s Mac product line: a new 24-inch iMac with an M1 chip.

The new iMac comes in seven color variants – green, yellow, orange, pink, purple, blue, and silver. The Apple desktop is completely redesigned and is so thin that it almost disappears when viewed from the side.

The device is only 11.5 millimeters thick and has a screen size of 23.5 inches (to be precise) with a 4.5K Retina Display, 500 nits of maximum brightness, P3 wide color gamut, and True Tone technology to adjust color temperature automatically based on the surrounding. You will have 8GB of RAM and 256GB of SSD storage as base configuration but can upgrade up to 16GB of RAM and 2TB of storage.

It is equipped with a 1080p FaceTime HD camera, six built-in speakers with two pairs of force-canceling woofers supporting spatial audio with Dolby Atmos. The “studio quality” three-mic array is positioned to reduce interference from the rest of the system and also has directional beamforming technology.

The iMac is powered by Apple’s ARM-based M1 chip with eight CPU cores and two GPU options: seven or eight cores depending on the configuration you want to pick. The M1 processor enables up to 85 percent faster CPU performance and up to 50 percent faster GPU performance than the previous generation iMac.

Along with the iMac, you can pick a color-matched Magic Keyboard (also available with Touch ID), Magic Mouse, or a Trackpad. The Keyboard with Touch ID has a dedicated security chip that communicates directly with the Secure Enclave in the M1, which generates an end-to-end encrypted channel for your fingerprint data.

The new M1 iMac starts at $1,299 for the base model. Pre-orders begin April 30 and shipping mid-May.